A downloadable game for Windows and macOS

“like a deep, centering breath in the corner of a quiet museum”
Eurogamer

“the game we’d most like to unwind with”
NME

“one of the most elegant, designerly games ever made for touchscreen”
Metro UK

“#4 puzzle games out this week”
Get Indie Gaming

A logic puzzle game, reky marries an elegance of design with an architectural minimalist aesthetic to create an experience that is fresh, stylish and satisfyingly challenging. The player interacts with the different puzzle elements of each level, shifting and moving them in order to create a path to the goal. Everything in the game is simple and functional, with only cubes, lines, exits, portals and a dash of color used to create a large variety of brain-teasing challenges.

In order to download this game you must purchase it at or above the minimum price of $5.99 USD. You will get access to the following files:

I have only played a bit so far, but it is a stylish and fun puzzle so far.

this game makes my brain so happy. the sounds are good and nice and they make me happy. thanks for making me smile.

make us happy to make you happy :)

Very smart and relaxing minimalist puzzle game. After figuring out how the rules of these puzzles are set up, you have all information at your hand you need to solve the level, which is an incredibly soothing affair due to the very pleasing sound design. Great puzzle ideas, unique mechanics, fantastic art style and simply easy to fall in love with. 4.5/5

really digging this game! Question though...I still can not figure out why the blocks sometimes change direction and sometimes don't? Is there something obvious I missed? I thought it was just picking up the color and putting it back down a second time but that doesn't always work?

Hey foodandsuch! Thank you for digging our game :)

So the first time you move a cube is going to one direction. Now if you move this cube again it will go back (the reverse direction), and so on and so forth.

ere are a few words about the basic mechanics:
The player controls this black ball, and the aim is to reach the exit of every level. There are gaps that block the paths to the exits that the player has to fill. How?
The colored cubes can move in one direction after the player clicks on the side of the cube. The cube will return in the initial place if the player makes a second click on the side of the cube. For each color, there is only one direction for all levels of the game. The distance of each colored cube can differ from level to level but it does not change during the level. At the beginning of each level the player can try it to see each distance of the colored cubes.
The second main mechanic is that the player can inherit (take) the colored cube by clicking on the cube while the black ball stands on the top of the colored cube. Then the ball will transfer the color and leave it in any white cube he has chosen, doing the same thing - standing on the top of the cube and clicking on the cube. The newly colored cube now has the ability to move in the way its color defines. Note that the ball must leave the cube in order to move the new colored cube.

thank you so much!!! yea that explains it. I tend to miss stuff like that in games so I appreciate the response and explanation :)

I love this game! Have been slowly and determinedly making my way through the puzzles for weeks

I've hit a weird bug though. Now, when I start the game, after the Unity ants company logos, the game just displays a black white screen with the music playing. Any ideas?

Hey Harry! Can you send us the log files. If you are on Windows should be:
C:\Users\<username>\AppData\LocalLow\beyondthosehills\reky\Player.log

Maybe we can see the error there.

I'm getting the same problem. Did you figure out what it was?

I have no Player.log file in that folder.

Reky is a fully-fledged and very polished puzzle game. I liked the puzzle mechanic and the atmosphere, but had several issues with the minimalist art style.

First and foremost, there are *significant* issues with the puzzle perspective. Blocks are flat without shading or outlines, which often makes it nigh-impossible to tell whether any two blocks line up horizontally or vertically. And this is not a small issue! It makes the already challenging puzzles even more difficult, and for no reason at all. I had a similar problem with the game Induction.

In a related issue, many levels involve multiple doors (= teleporters), and some are just mazes. And yet the art style is so obstinately minimalist that there's only the barest visual difference between normal doors vs. the level exit (wtf), and absolutely no indication for which doors are connected (wtf wtf).

Finally, the core puzzle mechanic involves blocks of different colors which can be moved by clicking on them. There's nothing to indicate the length of the movement. I think the same applies to the movement direction, too, though I think there's at least a consistent color coding in each specific puzzle level - not that I could ever remember which color corresponded to which direction. More opacity that necessitates annoying trial & error, when the game could be entirely clear by just putting an arrow and a number on each colored block.

To summarize, in all these issues gameplay quality was sacrificed on the altar of aesthetics and minimalism. It didn't have to be this way. For instance, I just finished Path of Giants, a puzzle game with a similar isometric perspective, and that game manages to clearly communicate how tiles line up and which puzzle elements are connected.

There's also a highscore system with a par move count for each level. It's a pointless mechanic that doesn't suit the genre, and yet you're forced to interact with it to some extent because you get stars for beating that par move count, and these stars are required to unlock later stages; just beating a level is not enough. This weird mechanic subtly discourages exploration, and exacerbates the opacity problems which force you to use trial & error to find out how blocks or doors are connected. At least there's a robust undo... Plus some of the later levels are *huge*. What exactly are you supposed to do when you miss the par of **164** moves by 2 moves, as happened to me once?

Ultimately, I liked the puzzle mechanic, and some of the levels were genuinely great. But due to the significant opacity issues, my overall experience of the game was rather mixed.

Hi there! I picked up Reky as part of the Racial Justice mega bundle and wanted to say that you've got a really polished game here! It's so stylish, and the audio engineering is fantastic. Got real Monument Valley vibes from it all. Sadly I got burnt out in section C due to all the back-tracking and such, but that's not to say they're badly made puzzles, just that they don't gel with me personally.

Can you put the android link

Click on "Get it on Google play, that is the android link, if you got your device connected to your Google Account you should be able to just install it remotely.

Looking forward to playing this game after all the positive reviews but unable to load game on my Mac at the moment. Getting an application can't open message.

Hey Sokkie. Do you have this problem using the itch.io app? We are still investigating the issue. You can check here for a temporary solution https://beyondthosehills.itch.io/reky/devlog/152780/reky-macos [reky dev team]

The artstyle reminds me of something (an instruction manual?) but I can't quite put my finger on it. With that being said, I played through Section A and I really enjoyed the interesting puzzle mechanics and the different area perspectives.

what a great game :)

is there an APK version ?

We are glad that you like reky. You can find the original android version via Google Play. Unfortunately we are not planning to provide an APK via itch.io

Thank you for the info. Will check the bug and fix it in the next update. [reky dev team]

This game is a very good puzzle game with a neat aesthetic and a quiet mood. However, for me it's something more interesting. Reky has been released a few days ago on Steam for a few bucks. As an indie project, I assume that it could raise a significant amount of money to its developers during a few weeks - and after a short time, like many other little games, it will be forgotten. This is the cruel rule of market. Being aware of this, developers did a real sacrifice so as to add this amazing game in a bundle in order to support antiracism movement. I like such point of view - some selflessness. As an indie dev, I don't know if I could have such morale fortitude or conviction. Impressive. Thank you for your good exemple. I really appreciate Reky. You deserve my respect. I wish you the best ++

Sweet game! I've noticed on a few levels I have beaten the jumps needed to get 3 diamonds and I get a symbol of two branches. Does this mean anything else?

Yes! This means that you found a better solution from the one we have initially defined. Designing the game we decided to have a human/personal approach on the way we manage the scoring system. We do not use an algorithm to define the best solution, rather we define the best solution based on our best solution among the dev team and friends. From the first game-playing tests we show that players find better solutions than ours in some levels and we found it very interesting and rewarding to keep it that way. Keep in mind that it's not possible to do that in every level.

There's a lot to like here, but I do have one complaint: the fact that there's no indication of which portals connect to which forces a great deal of trial and error on levels which are focused around a large number of portals, which I personally find more frustrating than engaging? I'm currently stuck on one such level (the third-to-last level in world C) and I rather wish I could skip it just because I'm not really enjoying it

Thank you for your feedback. The trial and error approach is part of the game design.You can use the undo button (upper left corner) or the "Z" button on keyboard in order to undo a movement/action.Also using a key from the game menu you can skip a level (unlock the next one), and then you can try to gain the key back later solving the level. We have 5 keys in total.

I see that now! I do appreciate that feature.

I can't buy it right now, sorry, but it looks great! Good job 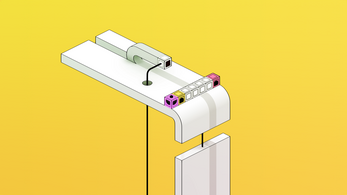 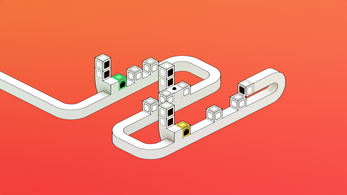 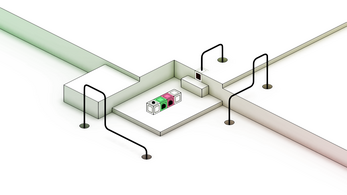 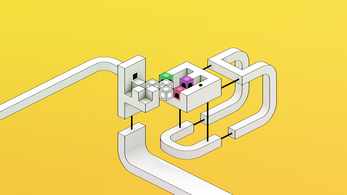 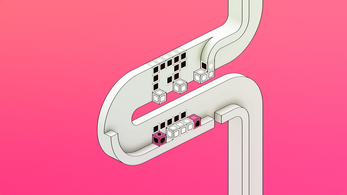 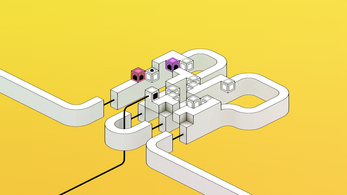 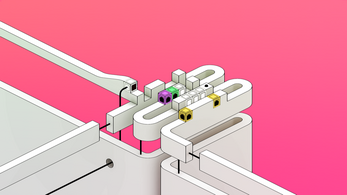 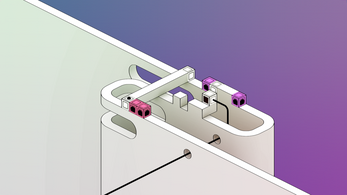 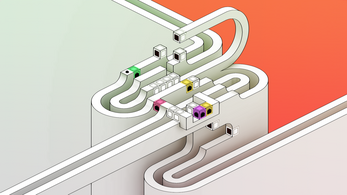 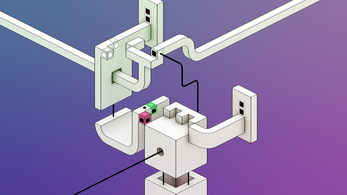